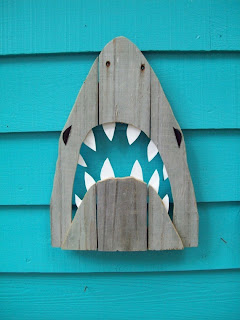 This morning I was thinking about the fatal shark attack that occurred in Western Australia this past Sunday. The name of the shark fatality victim is 24 year old Ben Linden. I Think the Herald Sun did a well rounded job covering this story. This is the fifth fatal attack in Western Australia in the past 10 months and is causing some alarm within the Australian community. The locals have nicknamed this shark "Brutus" and believe the shark to be....let's say enormous! Do we really wonder if Jaws originated out of Australia?

Speaking of Jaws, the 25th Anniversary of Discovery's Shark week is circling your couch. This is my favorite television show week of the year! The carnage begins Sunday, August 12th at 9pm! I am not a surfer and much prefer chlorinated water to salt. I am a competitive swimmer(retired) that does not swim with sharks, jellyfish, or anything else that might eliminate me. Of course, I am fully aware my odds of being eaten by a shark are very slim. I say...why take the chance? Shark week is certainly a good reminder to have a healthy respect for other animals that can eat you!