We are Penn State! {Discussion} 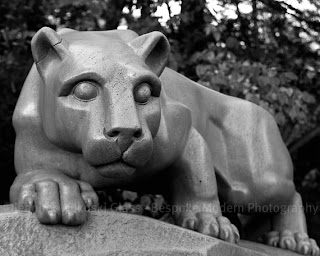 This Fine Art Photograph can be found on BeSpoke Modern on Etsy!

Debate has been looming over the University of Penn State for a good while now. I am speaking from an emotional place, because I am a Penn State Alum as well as a long time fan. Enough time has passed, however, that I feel I can speak intelligently as well. The initial emotion of it all divided people into two groups. Those who jumped to Paterno's defense and those who felt like he needed to get "Strung up"(so to speak). Now you can start to see the emotions clearing like the sun peering through storm clouds. People are speaking more intelligently and less emotionally about Penn State. Therein lies where the real solutions are to be found. I do feel the answer lies somewhere in the middle.

What I believe is the statue should go. You should not wipe every semblance of Paterno existence away, because this should never be forgotten.

Child abuse(sexually or otherwise) should not happen anywhere, but it does. I hope that the National awareness this case has brought will bring about some healing to the families involved and help to bring others the courage to speak out!

We will always be Penn State and not even Joe can destroy a proud institute that has been beating since 1855. Penn State wants to do the right thing and I believe we will. We are.....Penn State!