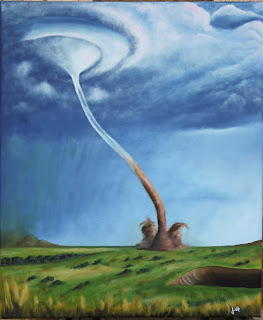 Visit Arts007 on Etsy! This piece is entitled, "Tornado on the Plains".


My family and I started driving home to Virginia on Saturday. It was the day after our area in the Mid-Atlantic was affected by "The Wind Event". We thought nothing of "the event" as we made our drive. My husband likes to torture himself by listening to the traffic reports on the radio (we live in one of the worst areas in The United States for traffic). We started picking up transmissions about the damage in our area and soon found out that over a million people were still without electricity! The electric companies were saying it could be days (until July 4th) before everyone's electricity was completely restored. My husband and I were a little worried at this point.

More worried after a woman came on and stated it was a "catastrophic event" in the Herndon/Reston area. That is right down the road from us. We could see lots of debris, signs, and a few large trees on their sides! The last part of the drive was slightly nerve wracking to say the least. We just needed to see that the electricity was on and our home was still in one piece. It was. Then I was thinking I cannot believe I missed all this action! A once in 25 years weather event! When I was a child my professional dream was to be a Warren Faidley (a famous storm chaser)!