A Real Ghost Story {Do you Believe?} 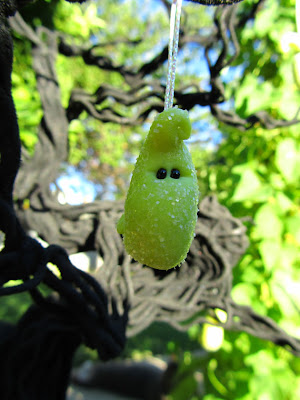 Glow in the Dark minature Ghost by Glo on Etsy!!!

My family and I live in Northern Va an area known as the "heart of the confederacy". Many battles took place very close to our home. I actually think one of Robert E. Lee's meeting spots is a few blocks away. There is no lack of "history" in the town which we live. Last year our family purchased a very old house 180+ years old. The house as described by long standing neighbors had some "history".

Our neighbor directly adjacent to us told of the biker gang era in our home. The front door was actually kicked in due to a drug raid at some time or another. Evidently, a daycare was also run out of our home at some point too. I believe that is why the front door got kicked in. The daycare was their cover and they were smuggling drugs out of the house. The last family that lived in our home seemed like a typical family, but I did find a prescription while cleaning for an anti-anxiety medication. I am sure the history does not end there.

I always heard noises from day one. A creak here and a groan there, but hey you would groan too if you were 180+ years old! Last night I heard a voice for the very first time a woman's voice. The first thing I heard was actually what sounded like rain and I woke up listening outside. It stopped and then I heard an echoing female's voice, "What are you doing here" ? I heard what I thought was a different voice in the background and it seemed they were having a conversation, but I could not make out what was said. *sigh*

My son's room seems to have the most "activity". My son has been sleeping fitfully the past two nights and it feels unusually cold going into his room. The hair stands up on the back of my neck when I go to check on him in the middle of the night. 2 am is about the time any noise starts. I guess you figured by this point I believe in ghosts. I do. I am not scared to be in my home. It was more fascinating to me than anything. I am a woman of science and like to reason it out. I could have been dreaming, but I really feel like I was stone-cold awake.

I am dying to hear from you all! Any ghost stories please share?