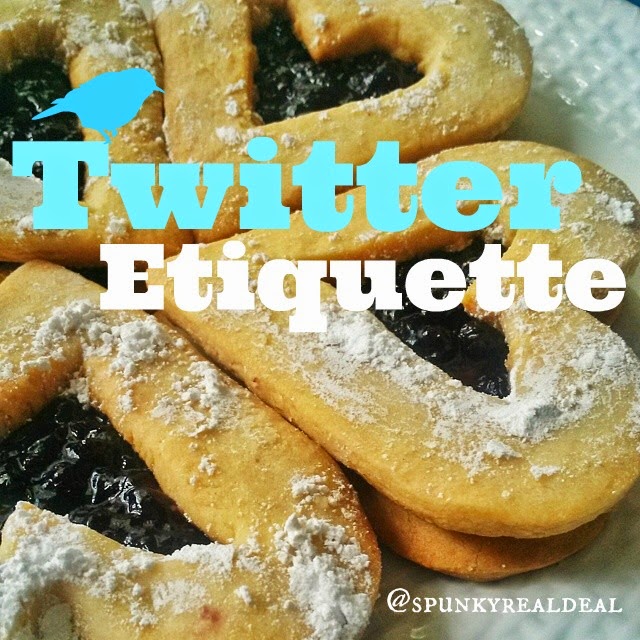 Twitter Etiquette:  a code of behavior that delineates expectations for social behavior according to contemporary conventional norms during Twitter use {*Ref 1.}.


This post has arose from increased frustration with other Twitter users. I have finally figured out what makes Twitter "tweet" and as a result my Twitter followers are now coming in groves. Social media by definition is all about the sharing and exchanging of information. With Twitter, the secret is sharing the work of others far more often then you share your own. Some Twitter users have grown very successful accounts by exclusively sharing the tweets and content of others{like @ExecTweets}.

Another popular Twitter account type, are those that stream motivational quotes{like @BusinessInspare}. Why am I telling you this and how does it pertain to Twitter Etiquette? The successful norms show you how to achieve social media success. Paying attention to what works is just as important as paying attention to what doesn't. Below are some tips to improve your Twitter Etiquette!

1.} Follow those who follow you. Start paying attention Twitter users! I daily go through and drop people who do not follow me back. Your initial safety net for keeping followers is by following them back. I get e-mail's so I know when someone follows me and then I can respond quickly and accordingly. The only people whom I do not follow is those without profile pics and those selling fake followers.

2.} Direct messages are a waste of time. Yes, yes, they are. They are automated and I never read them. When I do read them I get annoyed. The messages typically read, "Follow me on Facebook" OR "Purchase something..." OR "Thanks for following"! Even the later, however well intended, irks me. Stop sending direct messages unless you are sending a personal, "Hello!". Robots are not genuine no matter how you spin it.

3.} Stop using HootSuite. The exception to the rule are those that run five businesses with five separate Twitter accounts and even then you should simply pay someone to manage these accounts for you. Or maybe...you need to delete some of your accounts. When you send out robotic tweets every half hour people start to hit the permanent mute button with your feed.

4.} Return the favor. If someone tweets for you, tweet for them. If someone favorites your tweet, try to favorite one of theirs. Common courtesy stuff. Build your good Karma and it shall return to you with full force. I promise.

5.} Keep it simple. Short and to the point. I have been know to go on some Twitter rants, but try and save it for Facebook.

6.} Show some love. Twitter is all about the love! Shout out to people you respect, tag them, or simply thank someone publicly. @AlimondPhotog is the master of making people feel appreciated. As a result, she is a master networker.

So, the next time you are "tweeting" think about how you can boost your Twitter presence by helping someone else! Gain more followers, more respect, and more viral tweets by following these common sense steps from above. Good Luck my little Twitter junkies...may the tweets be with you!;-}