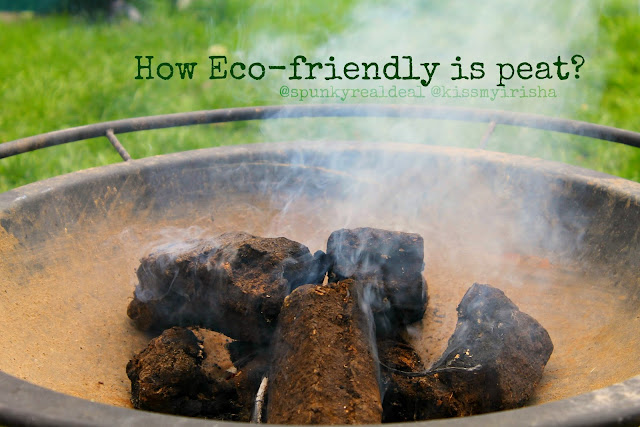 "Com-peating" with charcoal a.k.a. Pogue takes over the Stache's blog for a day. Hello and welcome to one of the few times I'll ever find a true foothold with which to corrupt Heather into anything of interest to both of us. These little nuggets happen so infrequently, so I have to snatch at them when and where I can, hence my agreeing to guest-blog today.  I never thought it would happen, but I'm going to give it a whirl, and with that being said, I want to talk to you about peat (I promise I'll do my best to make this as informative and fun as possible, but this post started out really boring in the first draft...I guess it can only go up from here).

Many people have probably heard of peat moss (mostly gardeners, I'm sure), but I find fewer people have heard of peat that you burn in place of charcoal.  It's something I've only seen available on Amazon and the like here in the US, but I was first introduced to peat as a fuel source while visiting Ireland as a child and young adult. In fact, many of my memories of those trips are triggered by the smell of peat, lending weight to the sense-memory theory. Unsure what peat is? OK, here's what you need to know:

Though using trees for fuel is the age-old method, peat came into use in Europe long before coal. It burns longer and slower, and until World War II, was considered the primary fuel for heating and cooking in many less industrialized areas of Europe. In America, peat was used as a fuel source as early as the 1700s.  In fact, we have several areas of peat-lands in the United States. Canada has an even larger land area where peat forms, yet we don't use them. Why? Admittedly, I'm no scientist. In fact, speaking science at me is one of the fastest ways to get me to stare at you blankly (the absolute fastest way is math, any kind of math). The research on peat sustainability is long and confusing, and a lot of it contradicts other research. To keep my head from exploding, I picked out a few things that I actually understood.

The basic reason we don't use peat for fuel here in the US is because back in the 1970s, there was a study on the primary fuel sources (wood, coal, peat, petroleum-based) which found that peat just couldn't "com-peat" (I know, horrible pun. I really couldn't help myself. I should be ashamed...except I'm not). With a carbon emission lower than charcoal, and an equally long burn time, I can't understand why it was decided that peat wasn't worth it (at the time coal and oil were much cheaper, and perhaps cost less in labor to acquire).  What's more? It's 100% organic.  It has to be. This is not just because it's plant-based, but because treating the peat-lands with any chemicals would destroy the acidic environment in which peat is formed.  There's literally no choice but to not chemically treat the land.

An arguable drawback to using peat is the fact that it grows at a rate of 1 millimeter a year.  Yes, you read that right.  Now stop for a second, because I want you to consider the bigger picture: that's 1mm over the entire bog.  Bogs aren't small.  In Ireland alone, the Bog of Allen spans 370 square miles, and that's not Ireland's only bog... just the biggest one.  Believe me, Ireland is famous for its bogs.  There's no shortage on the bog front, so 1mm a year isn't quite that small.  Peat is such a staple in Ireland that Bord na Móna, a semi-state company established in 1946, is in charge of overseeing all mechanized peat harvesting, as well as regulation. The whole of a single bog isn't harvested at once, so much of the land is given a rest.

In fact, the biggest threat to peat-lands has been draining for industrialization and Urban Sprawl, as opposed to harvesting and conservation.  Most peat-lands in mainland Europe have disappeared because of this, whereas peat-lands in Ireland and the United Kingdom remain due to concerted efforts to maintain the balance and allow the peat to reform. Though it grows slowly, no mountains are leveled for it (coal); no forests are destroyed (how many trees are processed into a stack of firewood?  How fast do they grow back?); There's no drilling anywhere to get it (or worrying about oil spills and cleanups). Peat, though slow-growing, can be used sparingly as it heats thoroughly for such a long period. 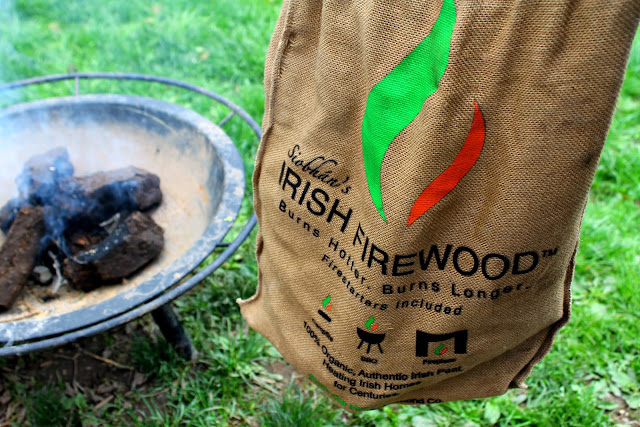 But what can you use it for?  How about a fire pit? Heather's two sense: "We used Siobhan's Irish Firewood and we love it!" It heats well, and during the cooler evenings of the spring and summer, the smoke will help keep the bugs away (a happy byproduct we've discovered). Though it burns slowly, it burns hot, meaning you'll never be at a loss for heat. OK, so maybe there are some people who are all about cuddling around the fire... hush.  Just sit a little further back, OK?  No need for a hissy over it. Just enjoy. Maybe someone brought along some marshmallows and you could try roasting them.  I bet that would be an interesting taste *Note to self: Force Heather to attempt s'mores...puppy dog eyes and "You love me, Heather" should do just nicely.
And of course, there's always that age-old thing we humans love to do with our food... Grill. You know how some people love the smell of a charcoal grill going?  I don't like the smell, personally, but I've heard such people exist, and must assume at least someone in the world would enjoy the odor.  I much prefer the rich, earthy perfume of burning peat bricks.  You might, without realizing it, have had a taste of this aroma, if you've ever enjoyed Scotch whiskey. Peat fires are used to dry the malted barley, imbuing said barley with a certain "peatiness" (that's a technical term accepted by all Scotch connoisseurs, and I refuse to accept any arguments. The word was used on Wikipedia, darn it!  I looked long and hard so I could have a name for it!). 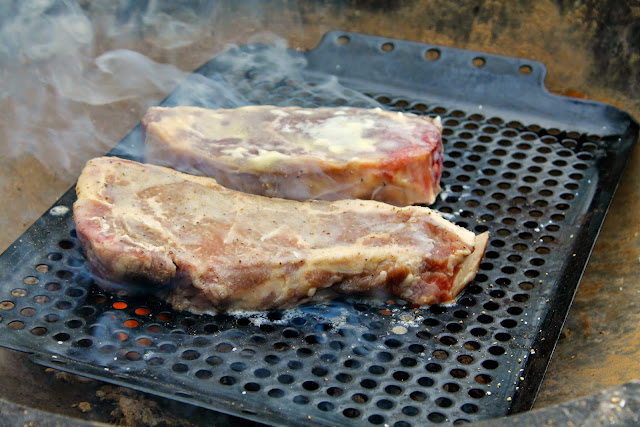 Grilling with it will likewise infuse the food of choice with the peat scent and an earthy flavor, which I found divine when Heather, my husband, and I grilled steaks and hotdogs over a peat fire a couple weeks ago.  Mind you, I'm actually not much for grilled steaks, I'd rather bake them since I have less chance of getting all that charred gunk on them.  There was very little char, however, and the peat lends a richness to the food that couldn't be overlooked, and we were all pleasantly surprised with how well everything turned out. (As an aside, Heather's husband told us grilling wouldn't be possible because he didn't think the peat would get hot enough.  Not only did we prove him wrong, we over-cooked the steaks...ha!)

Basically, there's a lot to do with peat. Peat moss (milled peat) is used in gardening (don't ask me what for. I don't have a clue, I don't garden) and dried peat can be used as a fuel source that some could argue is more renewable than, say, coal or oil.  Maybe you'll enjoy the smell and the flavors it lends to food; or maybe it gives you a more old-world feel and pleasant memories(like myself); maybe you'll use it so you don't have to deal with the horrible smell of citronella. It really doesn't matter.

Here's the really boring part, only squashed and made less boring by merit of this is what I've actually understood of conflicting, argumentative, sometimes confusing research (let's all give me credit for attempting to read scientific studies, OK?  Can we all agree Heather can at least give me a cookie for trying?): peat's carbon emissions are less than charcoal, which has the highest; you don't get more organic than peat because no chemicals are used ever; the mass of ecosystems destroyed for production is much less than the larger ecosystems destroyed in deforestation, due to clear-cutting and lack of conservation; and damage to the environment is lessened (no drilling or spilling, no mining; plant matter found in peat has already decayed).  It's a tough call, and I know there's more science to it than I'm qualified to discuss, but that's what it's come down to for me.

I probably should've stuck to "this is why you should be using peat" instead of trying to give you the Eco-science, but this is Heather's blog and that means I kind of have to go with her blog theme (at least if I want this posted). Can you believe this is sort of my introduction to the blogging world?  This is nepotism at its finest, people. She thinks I'm funny and I have good taste in hummus, so I'm allowed to do this (I'll do this post in a more Irish-centric way on my own blog, once it's up and running...you'll like me better there.  I'm way more endearingly crazy and less "I'm trying to sound intelligent and science-y". Also, I don't have to research big words I don't understand. I like me better on my blog, too. *This is Heather's two sense. Pogue: First, that makes sense, because it is my blog. To my readers: Please pretend that Pogue is reading this entire post in a heavy Irish accent....hysterical. Note to self: She will most certainly flip me off later. 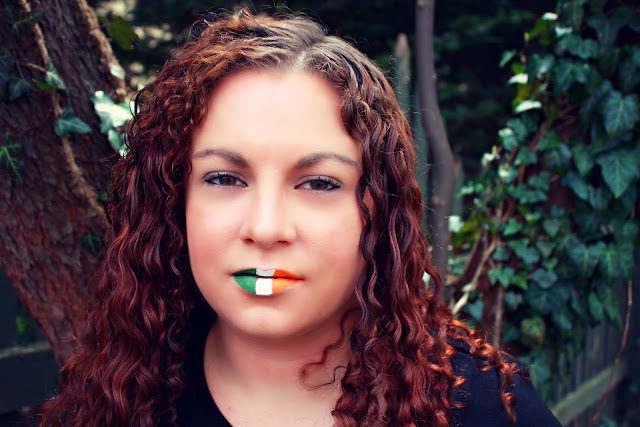 Wow! That was actually supposed to be "Thanks, Heather, for letting me guest-blog for you, and I somehow turned that into an apology for not being nearly as crazy as I usually come off as... She's going to edit most of this, I hope you all understand this was probably way crazier when I sent it to her.  I'll let your imaginations roll with that one...oh, and buy peat. Save the trees and mountains.
Labels: analysis Bogs Cooking with Peat Eco friendly Fire Pit Fire Pits heat source Irish Irish Blogger Is peat Eco-friendly organic Peat Peat versus Charcoal Pogue research sustainability What is Peat