Better to be lucky than good. TV Gold. #abc7news 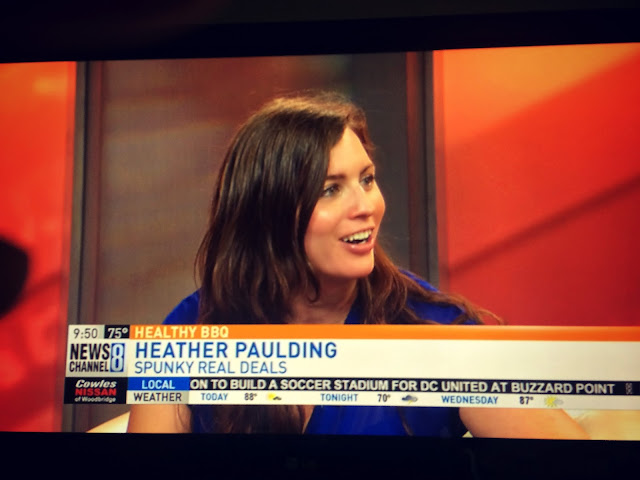 Look Ma, I'm on TV! Two days ago, a post caught my attention in our Virginia Bloggers Club Facebook group. María José Ovalle(the popular blogger of a Very Busy Mama) posted about a news opportunity with ABC 7 news for Good Morning Washington. By the time I got to the post, several people had already responded and liked the post. I knew that meant the opportunity was most likely taken. I did not feel defeated however: there was a phone number and a contact name. I grabbed my smart phone at lightning speed and dialed the numbers hopefully.

Upon talking to the contact person, she informed me that the opportunity was indeed available. What luck! I promptly stated that I would do it and to kindly send me details. Elated and terrified, I knew this opportunity was meant for me. A long series of events had to unfold in order for me to get this engagement. Two well-qualified and wonderful bloggers turned down the gig before it even got to me. I do believe it is better to be lucky than good. A few hours later, I found myself talking with Mary Garcia(the amazing foodie blogger of a Goodie Godmother). She already responded to the opportunity, however, she turned it down.

This is where the real adventure begins. I received an e-mail with all the required information on Qrunch Foods(the topic of discussion), how to act on camera, and most importantly time/location of the LIVE skit. Step 1.) complete. Step 2.), locate Qrunch Foods quinoa veggie burgers! Finding them was a bit tricky, but it really only took two grocery store stops. Next, I needed to memorize vital information about the company and quinoa. I never had quinoa until two days ago, but it is indeed addictive and delicious. By the way, if you are looking for a incredible quinoa veggie burger then you have to try Qrunch Foods. They have several flavors: Classic, Spicy Italian, Curry, Spicy Buffalo, and Green Chile. Brand name dropping aside, I was terrified. Terrified is a strong word, but I was. 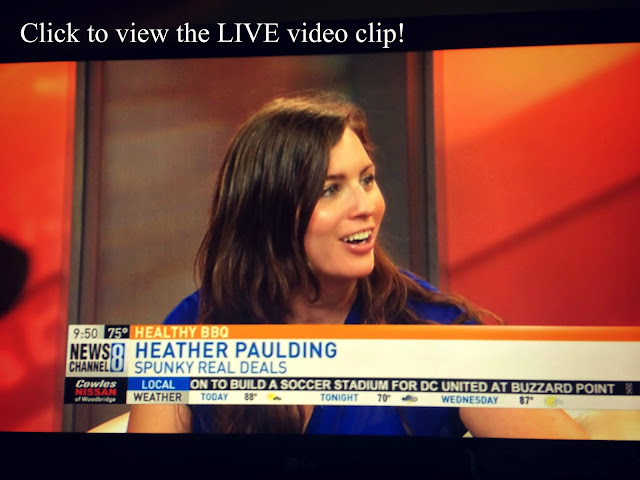 Scared yes, but not enough to fain a secret illness and cancel. Honestly, I felt ready and looking back at the video I was. Although I left two hours early, I barely made it to the station on time. I am a very timely person and thinking about being late made me nauseous. Especially, for a LIVE skit on Good Morning Washington! Luckily, my husband occasionally works in the same building and THAT is the main reason why I made it. He gave me detailed instructions on the driving routes I should take/avoid, where to park, and little details that saved me precious time.

Upon arrival, I had no idea which floor ABC 7 news was on. I guessed and came to a floor that looked like it was a winner. It appeared a bit vacant, but it had the ABC 7 news logo embossed on the windows! I tried the door and nothing. So, I asked the "man at the desk". "Take the escalator downstairs", he said. With my heels and all my veggie burger possessions, I tried not to plummet head first down the escalator as time is ticking away. At this point, it is close to 9:30 am and the LIVE skit is at 9:45 am. Lord, have mercy! I have arrived. 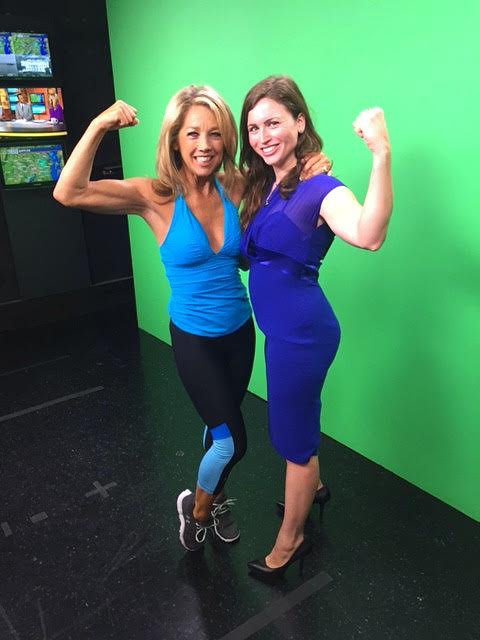 I pulled the door hard and entered the studio. "Heather"? They were definitely waiting for me.  I turned to my left and saw a ray of sunshine beaming next to me. "Denise Austin", she said smiling and shaking my hand. Wow, really?! My mom had some of her first VHS exercise videos! She looks outstanding. As you can see, her biceps are a thing of beauty!

They swiftly escorted us to the back where there are bathrooms and chocolates. Thank goodness! I thought it would be the worst time ever to pee myself, so I quickly ran to the bathroom before anyone could approach me. I had precooked the Qrunch Foods veggie burgers and had all the fixings in my plastic grocery bag. I had cherries too, but spilled half of them in the car...rush hour is a real jerk. I was approached by two really nice people(who were obviously running the show and keeping everything flowing properly) and they told me I would be taken to a staging area soon to set up.

I realized*head slap*, that I should have composed my quinoa burgers before leaving the house! I took out my crappy butter knife and started butchering the tomato and slicing the fresh mozzarella. Also, I forgot the other box of quinoa at home and my fresh lettuce. All I had for the camera was an open and mangled box of quinoa veggie burgers. Then I was asked, "Do you have a table cloth"? Nope. I did not even have plates! I had no idea that I needed all this stuff! What a rookie! You cannot tell in the video, but the quinoa veggie burgers are sitting on a plastic Tupperware lid. Wow, right?

Thankfully, the news anchor that I chatted with was a pro! Autria Godfrey put me at ease and really led the way. I pretty much blacked-out during the conversation, so I was relieved to find out my husband video taped it for me. I ran out as soon as the taping was through after thanking everyone and apologizing for my rookie incompetence. I can only hope that they will have me back someday.

Moral of the story? Go for it. Give it your all and do not back down from a challenge. Risk failure and with it great rewards. Also, bring plates and a tablecloth.
Labels: ABC news ABC news 7 blogger opportunity DC Denise Austin Eco friendly Eco living funny Good Morning Washington humor inspiration News organic food Qrunch Foods Quinoa TV vegan veggie burgers