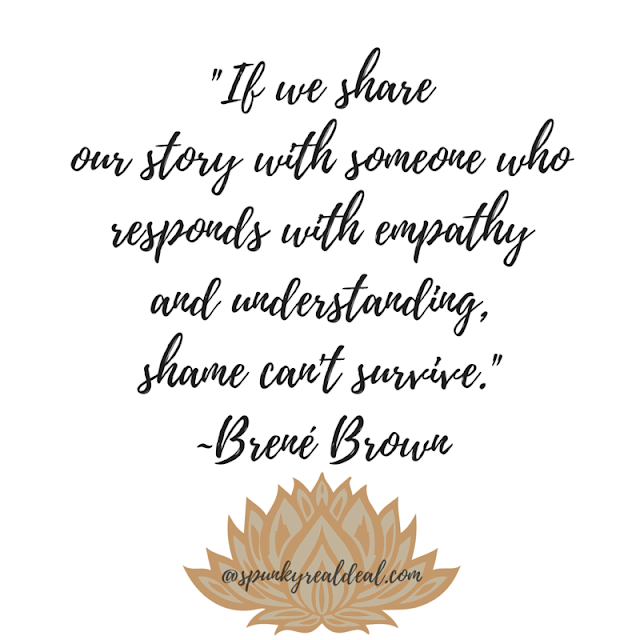 What a shame, what a shame. That's what people will say when you go through a hardship. A real hardship is something that affects the spirit and delves deep down to the core of your soul. Folks may say "What a shame" to your face, but they will most likely say it behind your back. When you go through a hardship like depression, major illness, chemo, financial poverty, death, etc...you have everyone seemingly analyzing your every single move.

Dealing with my shame has been the most difficult part of my anxiety, depression, fear, breakthrough, spiritual awakening, and/or late-onset of bipolar disorder. Whatever you call it, be sure that shame comes as an extra large side order. Shame that I have brought to myself and my entire family. More importantly than the acute "mental illness" shame, it is the fear of prolonged shame and never living down your mistakes. It isn't even a mistake, but something that simply happened as a combination of genetic and environmental factors. Short-term shame is manageable, but long-term shame is a hard pill to swallow. Many of my familial relationships will never be the same again. I will never be the same again.

Inspiration from Rising Strong by Brené Brown. "It is not the critic who counts; not the man who points out how the strong man stumbles, or where the doer of deeds could have done them better. The credit belongs to the man who is actually in the arena, whose face is marred by dust and sweat and blood; who strives valiantly;...who at the best knows in the end the triumph of high achievement, and who at the worse, if he fails, at least fails while daring greatly." ~Theodore Roosevelt's  1910 "Man in the Arena" speech

With family members and friends that do not know me well, I shall see many head shakes and woeful glances. However, none of it matters. If I am to recognize these exchanges, then I am to give away my power. This is my battle, my struggle, but also my triumph. I will not let this bump in the road define my life. I must move forward and I must let go of this sludge called shame. Shame, you can no longer echo within the hollows of my mind. Your loneliness and sadness no longer play a major role in my life. I have learned the gift of vulnerability today thanks to author and inspiration Brené Brown. I also found renewed compassion for others through my struggles. This week I got to share my renewed compassion with a blog fan that sent me an e-mail during her hour of need.

I got a very poignant e-mail from a single mom who is struggling financially. I gave her money. My husband asked me why I gave her money. It was $5 and it was not about the money. It was about humanity. It was about reaching back out to someone who reached out to me for help. I get many soliciting e-mails, but something told me that this one was different and it was certainly sincere. Perhaps she is a good scammer you might say, but I don't think so. In fact, I wrote her back and told her that she and her daughter were in my thoughts and prayers. She wrote me back and seemed grateful for the positive exchange. Some words of encouragement and $5 can turn a life around, but more importantly it can instill and give renewed hope. With real empathy and compassion shame truly cannot survive.